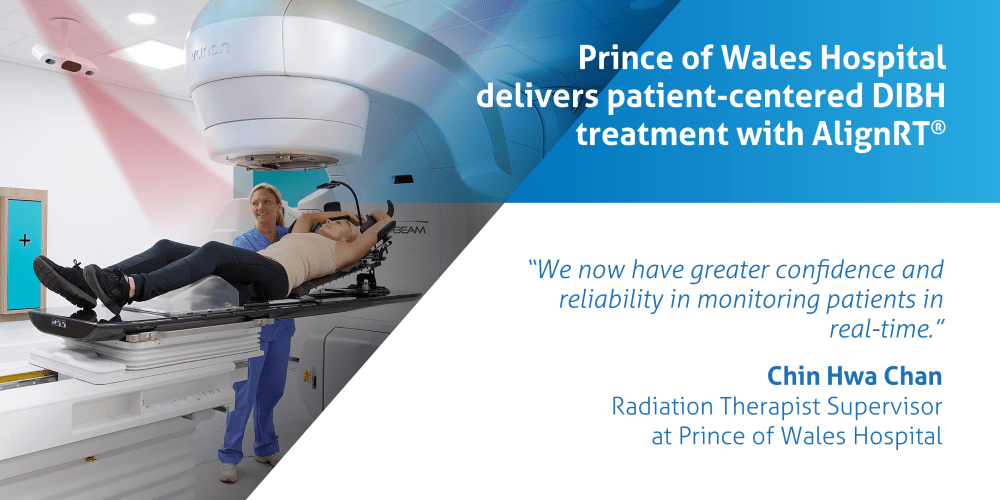 The pursuit of the highest possible care for patients is the goal for cancer centers all over the world.  For Prince of Wales Hospital in Sydney, Australia, this meant implementing AlignRT.

To maintain high degrees of patient care and further decrease set-up errors, the Prince of Wales Hospital decided to upgrade its systems for Deep Inspiration Breath Hold (DIBH) treatments. The department came up with a list of key requirements, including: automatic beam-hold, improved workflow, and a system which would help improve patient comfort. After an extensive assessment process, the team chose AlignRT. They installed the system 3 month later.

Chin Hwa Chan, Radiation Therapist Supervisor at Prince of Wales Hospital says the benefits of this new technology quickly began to show. “Since the implementation of AlignRT, we have been able to address set-up errors that were not previously observed within an acceptable time frame and acceptable ergonomic load. This less invasive technique has made patient set-up more efficient”.

AlignRT is a contactless and non-invasive technology that tracks patient’s position before and during radiation therapy with sub-millimetric accuracy. This ensures radiation is delivered exactly as planned. “We now have greater confidence and reliability in monitoring patients in real-time” says Chin Hwa.

In traditional radiotherapy treatments, permanent tattoo markings were the preferred option to ensure treatment was delivered accurately. For some patients, these tattoos became a painful reminder of their cancer treatment. By using AlignRT, the Prince of Wales Hospital was able to join a growing number of hospitals around the world offering tattoo and mark-free treatments.

The Radiation Therapy department treated more than 200 patients with AlignRT last year and since February 2021 has eliminated radiotherapy tattoos for 99% of its patients.

Chin Hwa added that, in addition to being able to apply targeted radiation treatments, patient feedback has been extremely positive. “Patients are noticeably more comfortable knowing they will not receive permanent tattoos during their treatment. It is evident that patient set-up is more reliable and accurate since the introduction of SGRT and tattoo-less workflow”.